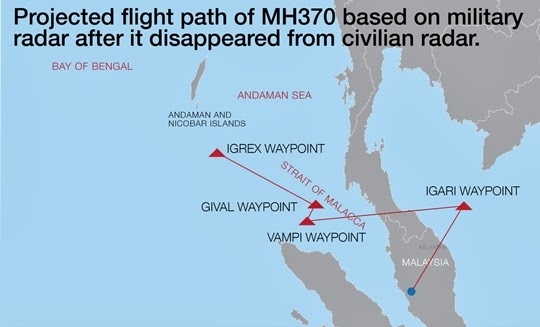 The military did not respond when it saw an unidentified flight on its military radar as they had assumed that the air traffic control in Subang had ordered the plane to do a turn back, deputy Defence Minister Datuk Abdul Rahim Bakri told Parliament today.

"It was detected by our radar, but the turn back was by a non-hostile plane and we thought maybe it was at the directive of the control tower," he said in winding up points raised by MPs on the King's royal address.

It had been reported earlier that a non-hostile aircraft flew right across the country's air space in the early hours of March 8.

Malaysia has come under severe criticism after it was revealed that the military radar tracked an unidentified craft - now confirmed to be Malaysia Airlines flight MH370 - but did not take any action.

In an earlier report, the British Broadcasting Corporation had said this raised questions about security gaps while a former British Royal Air Force pilot and aerospace analyst Andrew Brookes had said that the government and air force will have some serious matters to address.

Abdul Rahim, however, dismissed criticism that delays in disclosing military radar data might have hampered the search for the missing jet, saying that there was a need to corroborate the information it received with other agencies investigating the case such as the Federal Aviation Administration (FAA), National Transportation Safety Board (NTSB) and the Air Accidents Investigation Branch (AAIB). "We do not want to make any definitive answers until we are 100% sure. Once we had the resolution that the turn back was indeed the missing aircraft, we immediately deployed assets to search for the plane," he said.

The search was initially focused on the South China Sea, but was then moved to the Andaman Sea and the Malacca Strait.

The search for the Boeing 777-200ER was expanded to the Indian Ocean after receiving data from British satellite operator Inmarsat.

Contact with the Beijing-bound flight MH370, which took off from Kuala Lumpur at 12.40am on March 8, was lost at 1.40am, shortly after it left Malaysian air space over the South China Sea.

After more than two weeks of searching for the jetliner with 239 passengers and crew, Prime Minister Datuk Seri Najib Razak announced on Monday that the flight had ended in the southern Indian Ocean, with MAS saying there could be no survivors.

Investigators are now trying to ascertain what brought MH370 to a remote area in the southern Indian Ocean, where search operation is currently focused.

They are also probing whether the plane was deliberately crashed or flew on autopilot, according to The Wall Street Journal.

"If and when we get a more precise location, then we might be able to work out if it drifted on autopilot or if it was flown there," the paper said, quoting a Malaysian official involved in the probe.